What is the difference between New York City and Houston? A lot and a little.

I have been reflecting quite a bit since UBC staff members returned from our visit with the Metropolitan New York Baptist Association (MNYBA) in Manhattan. Our cities are similarly diverse, but New Yorkers often tend to congregate and live together in ethnic centers, whereas Houstonians tend to live scattered amongst everybody else. New Yorkers talk to each other. Houstonians… not so much. New Yorkers walk. Houstonians drive. There is a church on every corner in Houston. New York… not so much.

But people are people, and people are starved for God. They need community and friends. They need someone to pray to, someone that they feel might actually answer them. I came home absolutely inspired by the work being done by church planters in New York City. Here are some examples:

James prayer-walked around Long Island University’s campus for months, asking God for an opportunity to serve the students on a campus where there has not been an evangelical presence in over seven years. God answered his prayers and he ended up being given an office in the freshman dorm!

Boto works hard to serve and befriend Hindus. As a result he is welcomed into the homes of people from Nepal, Bangladesh, India, Pakistan and Tibet. He openly prays for them in the name of Jesus and he loves people so freely that he is welcomed wherever he goes.

Lindsey started taking baked goods to a local strip club, giving them to the bouncers and bar tenders as a “supporting our local businesses” initiative. As a result she and her cupcakes are now welcomed monthly (“The Cupcake Ladies are here!”) and she has had an opportunity to sit and talk with the dancers. When someone asked her what she sees in the eyes of the girls she said, “I see myself. I see the same desire for acceptance and belonging that they have. They just go about it in a really hard way.” (paraphrase)

One day, as we were getting off the subway, I stood above a sort of causeway of pedestrians streaming like a river in their hurry to get wherever they were going. I thought about the statistic that Steve Laufer noted in his blog: out of 22 million people in the tri-state area only 6% call themselves Christ-followers. That number plagued me as we rode the subway, walked the sidewalks and ate in the restaurants. Rivers of people flowing toward destruction. The next day I was walking alone in Central Park on my way to meet a few of the others. I was praying and imagining 6% of all the crowds I saw. I stopped to sit on a park bench because my feet hurt (I’m not used to walking that much) and I prayed something like this: “Lord, You seem so far away here in New York City. Look at all these people. So many of them have absolutely no connection with You. It feels so overwhelming and urgent. Where are You in this?”

Just then I began to hear music coming from the other side of the trees. A group of four guys playing “The Old Rugged Cross.” I followed the sound until I found them. Their next song was just a regular song. It was almost like God answered my prayer. “I’m here. You don’t need to feel urgent. You just need to be obedient.” 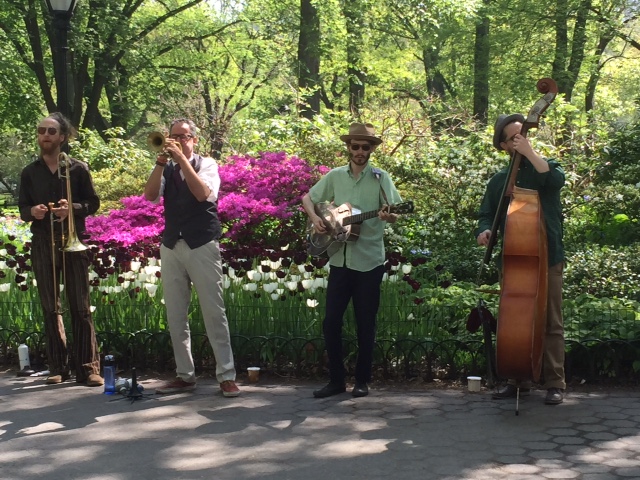 Houston has rivers of people, too. Just stop on any overpass and you see the same thing, only the people are hidden inside their cars. We can learn a lot from New Yorkers about how to develop relationships in creative ways. We got to see church planters doing it in lots of different ways, depending on the circumstances, the population or the worldview. UBC has a lot to learn from the hard-working believers in New York City. And we have a lot to offer them.

I am interested to see how we can partner with them over the next few years. I truly see a one plus one equals three relationship in the making. I wonder who will benefit most… us or them?