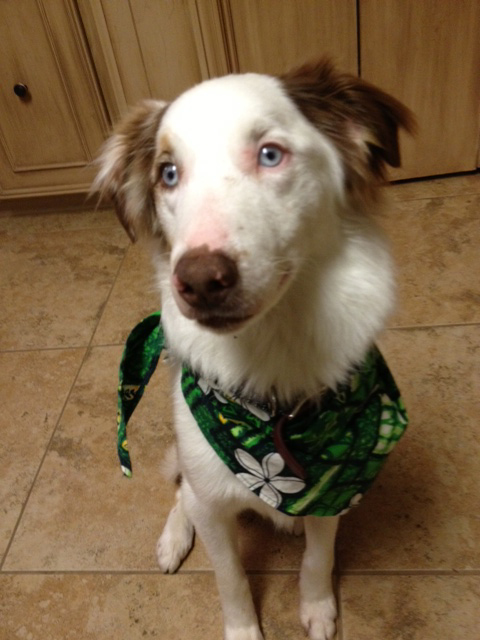 My college-aged daughter, Lindsay, did a crazy thing recently. She adopted a dog. And she didn’t just adopt your run-of-the-mill SPCA dog. She adopted a purebred Australian Shepherd. He is white with brown markings and he’s got crazy blue eyes. And he is deaf.

I didn’t know that God made deaf dogs, but apparently, when Australian Shepherds are born mostly white they have all kinds of physical issues. Cooper, the dog, is deaf, and his crazy blue eyes are a little bit blind too, in harsh sunlight. He lived with a trainer for the first year of his life and learned sign language! And since Lindsay was president of Deaf Aggies and Friends at Texas A&M then it only made sense that she would adopt a deaf dog…right? (Cooper’s eyes aren’t the only thing that’s crazy!)

Well, he’s our granddog and we’ve fallen in love with him, of course. He’s a year old and like any young puppy he has, how should I say this, lots of energy. We learned quickly never to leave him alone and unsupervised in our house. The one time we did, we came home to broken pottery, an emptied trash can, and somehow he had managed to pull the coffee maker off the counter! So now he gets locked in a wire crate when we’re gone. He sits in his crate and cries while our mature, well behaved dog, Jackie, gazes at him with a superior, patronizing look. “If you would be obedient you wouldn’t have to put up with this humiliation! Dummy!”

Well, Easter Sunday the whole family went to church and left poor Cooper locked forlornly in his cage. He had only a few bones to worry on and the reassurance that we would be back soon (which, by the way, dogs don’t understand. Their only concept of time is “forever”!) I was the first one home and guess who met me at the door? How on earth??? I went and looked at his cage and it looked exactly the way it did when we left! It was almost like he waited for us to leave and then squeezed his crazy blue eyes and just materialized on the other side of the wire! He has done this before and Lindsay learned to wrap a chain around the gate in order to lock him in even better. But he still managed to work his way out. When we inspected the floor we discovered a little spot of blood. He really, really wanted out of that cage.

I went to a biblical counseling conference last weekend and one of the points that I brought home was this: Don’t confuse insight for change.

Have you ever known people who have been in bible studies for years but there doesn’t seem to be a lot of real transformation in their lives? They continue to struggle with the same areas of sin, the same bad habits, the same marital issues, the same negative attitudes year after year. They are believers. They have accepted the salvation offered to them by Jesus Christ, and yet they remain locked in the same areas of imprisonment in their personal lives that they’ve always struggled with. They read scripture and respond to it: “Wow! That is powerful truth!” They agree with it and even tell their friends and family about it. And yet…the bondage remains. Why?

Philippians 2:12-13 tells us to “work out your salvation with fear and trembling, for it is God who works in you to will and to act in order to fulfill His good purpose.” God works in us, but we are responsible to put some effort into it as well! What about you? Are you laying in your cage reading your Bible?

I heard an analogy about this once. A man told his daughter to clean her room. She said “Yes Sir” and proceeded to call her friends. They met together in her room and had a meeting about cleaning rooms. Then they sang a song about clean rooms and then they held hands and prayed that God would help them clean their rooms. Then they went out and talked to strangers about how important it is to clean your room! One of them even wrote a book about how to clean your room.

That story made me feel a little guilty. How often do I talk about the sanctifying work that God does in people’s lives, yet all the while I am not putting the hard work into getting out of my own places of bondage. I learned a lesson from Cooper on Easter Sunday. If you want to get out of your cage, even when the chains are wrapped tightly around you, you’ve got to work hard at it. Has my effort been that dedicated? Has my attitude been, “At all costs I will get out of this place, with God working in me I will work my way out of this place!! I will SQUEEZE… MY…. NOSE… OUT… A FEW… MORE… INCHES…. A… LITTLE FURTHER… A LITTLE…. FURTHER….!!!”

The result would be freedom. Freedom to be obedient to the One who died for me. The freedom that is REAL freedom.